In its closing argument, the defense of the first RS interior minister Mico Stanisic denies he was part of a joint criminal enterprise aimed at eliminating Croats and Muslims from Serb-controlled parts of BH. The defense has asked for his acquittal on all counts in the indictment. The defense of the second accused Stojan Zupljanin likewise believes the prosecution has failed to prove his guilt beyond reasonable doubt 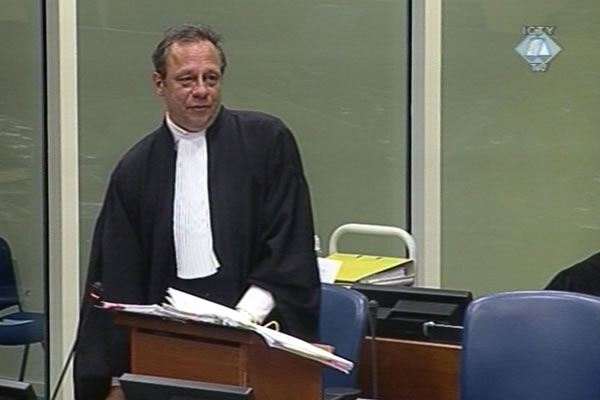 The defense of Mico Stanisic, the first Bosnian Serb police minister, has urged the judges to acquit its client on all counts in the indictment. Stanisic is on trial with Stojan Zupljanin for crimes against Bosnian Croats and Muslims in 1992. Zupljanin’s defense has indicated it would also call for its client’s acquittal. Yesterday, the prosecution asked the judges to sentence both of the accused to life imprisonment.

Stanisic’s defense counsel said in the closing argument that the prosecution’s view of history is ‘monochromatic and superficial’. According to the prosecution, the events in 1992 occurred ‘in a vacuum and out of context’. The defense referred to English historian and philosopher Isaiah Berlin, who said, ‘history is not only what happened but what happened in the context of what could have happened’. The prosecution has ignored this view, the defense lawyer argued, criticizing the prosecution for having ‘misunderstood and misinterpreted’ the evidence, and for having ‘completely ignored the entirety of the evidence or made constructs not supported by evidence, or all of the above’.

Lawyer Slobodan Zecevic dismissed the prosecution’s arguments that Stanisic was responsible for inciting, abetting and aiding the crimes. The accused has no command responsibility. In Zecevic’s view, Stanisic is not guilty of participation in a joint criminal enterprise. There was no such enterprise, Zecevic said, and even if there had been one, Stanisic ‘wasn’t its member and wasn’t aware of its existence’. Stanisic’s actions ‘did not contribute in the least to its implementation’, the defense lawyer said. On the contrary, if such a joint criminal enterprise existed at all, Stanisic ‘obstructed its implementation’.

Countering to the prosecution’s claims, the defense argued there was evidence that the RS MUP didn’t participate in the joint criminal enterprise. The defense brought up ‘explicit demands of the government’ to the municipal crisis staff not to interfere with the command and control in the army and police. The interference of the municipal crisis staffs nevertheless continued unabated, and this is ‘undisputable’. The prosecution had to prove beyond reasonable doubt whom the local police obeyed, whose orders they implemented and to whom they reported, the defense argued. The evidence has shown that ‘autonomous authorities undoubtedly exercised control over the MUP bodies’: they appointed chiefs, paid their salaries and issued orders. In turn, the police carried out the orders and implemented the local politicians’ decisions. This whole process went on ‘independently from the RS MUP and without the knowledge of the top police officials’.

At the beginning of its closing argument, the defense of Stojan Zupljanin, former chief of the Banja Luka region police, compared the accused to a British police officer, a bobby, who had to do his job at a time when a ‘superhero’ would be powerless to prevent crimes. As the defense argued, the prosecution’s allegations that Zupljanin failed to prevent crimes and punish perpetrators were ‘naive’.

According to the defense, the prosecution ‘has failed to prove anything’. The burden of proof is not on Zupljanin, the defense argued, and unless his guilt has been proven beyond reasonable doubt, he should be acquitted. Zupljanin’s defense will continue their closing arguments on Friday.