SESELJ WILL NOT RENOUNCE CHETNIK VOJVODAS, BUT DENIES ANY LINKS WITH THEM

As the Serbian Radicals’ leader continued his closing argument, he repeated several times that ‘I will not renounce my Chetnik vojvodas’. He claimed, however, that the facts clearly show he had nothing to do with the vojvodas mentioned in the indictment and did not sent any of his volunteers to them. He visited them on rare occasions, but that was the extent of his relationship with them 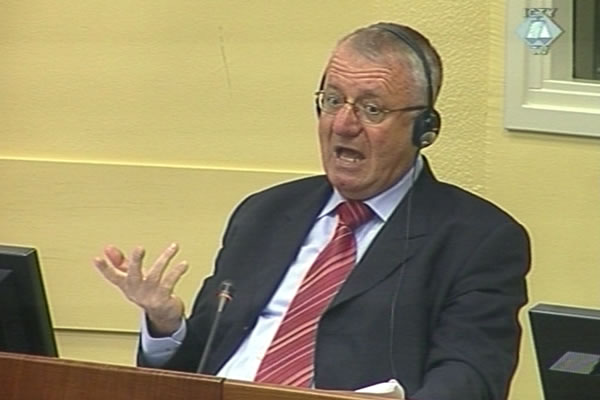 Vojislav Seselj contends that the prosecution has failed to prove any crimes committed by the Serbian Radical Party volunteers in Croatia and BH. The witnesses who had made claims about those crimes either withdrew their statements or were ‘debunked’ by Seselj in the cross-examination. As he continues presenting his closing argument, the accused said that the Muslims and Croats may have feared ‘Seselj’s men’ but their fear was not caused by the actual crimes committed by his volunteers, but by ‘prejudice about Chetniks fomented by the Communists’.

Responding to the prosecution’s allegations about the crimes committed by ‘Seselj’s men’ in the Sarajevo area, the accused said that there was no evidence of them. Seselj added that the prosecution linked him with Chetnik vojvodas, war leaders, in Sarajevo – Slobodan Gavrilovic Brne, Vasilije Vidovic Vaske and Slavko Aleksic, and yet he never sent any of his volunteers to these men during the war. Seselj didn’t deny that he visited the ‘vojvodas’ occasionally, but claimed that his relationship with them did not go beyond those visits. Seselj repeated several times ‘I will not renounce my vojvodas’: he was merely presenting facts as they were. The only person whom Seselj disowned completely was former Republika Srpska president Nikola Poplasen, whom Seselj called ‘a collaborator of the OTP’. As Seselj said, Poplasen only received his rank of a Chetnik vojvoda because he had excelled as the commander of the ‘Student Detachment’ in the fighting in the Banja Luka area at the end of the war.

The accused presented a similar argument about the crimes in Mostar and Nevesinje. Seselj contends that ‘Seselj’s men’ were not deployed at the locations where, according to the indictment, war crimes against civilians were committed. Seselj called on the prosecution to identify at least one SRS volunteer who committed a crime.

Apart from the crimes in Croatia and BH, Seselj was accused of calling for the expulsion of Croats from the village of Hrtkovci in Vojovodina in his speeches. Seselj thus incited his followers and the local authorities to join the persecution. Seselj contends that the rally after which the Croats allegedly started leaving the village of Hrtkovci was part of an election campaign. As he explained, he didn’t call for the deportation of Croats but advocated a system whereby Croats from Hrtkovci and Serb refugees from Croatia would swap their properties. Seselj didn’t deny that this happened, but argued that ‘Croats fared better’: the property in Croatia that the Croats ended up with was more valuable than that the houses and land they left behind in Vojvodina.

In general, as regards hate speech, the Serbian Radical Party leader considers that under the rules of international law only incitement to genocide is a crime. In Seselj’s view, calling for other war crimes is not a crime. He is therefore sure that he cannot be convicted on the basis of his speeches. Seselj noted that in the previous judgments of the Tribunal the judges held that ‘verbal offenses cannot be treated as attacks’ and thus cannot be considered an element of persecution.

Seselj denied any links with Ostoja Sibincic, a local bully from the village of Hrtkovci, who outrivaled all the others in assaulting Croats. As Seselj argued, the fact that he advocated Sibincic’s release from prison didn’t mean he was responsible for Sibincic’s crimes. Seselj insisted that Sibincic was not a member of the SRS at the time. Seselj aired a similar argument yesterday when he denied his responsibility for the crimes in Vukovar, Bosanski Samac and Brcko, by claiming that some of the volunteer unit commanders joined the Serbian Radical Party once they were no longer involved in the fighting. Seselj used the example of Predrag Milojevic a/k/a Kinez who was convicted in Belgrade for his role in the crime against Croats at the Ovcara farm in Vukovar. Milojevic wore a helmet with the red star insignia, and became a Chetnik later.

Seselj concluded his presentation with his oft-repeated argument that the OTP and the Tribunal were an ‘instrument of the dark forces’ and of the new world order whose ‘vile and perfidious task’ was to ‘spite the Serb people’ and remove Seselj from the political scene.

The accused Serbian Radical Party leader will continue his closing argument next Tuesday.