Simatovic’s defense considers that the prosecution has not called any evidence that establishes a link between Franko Simatovic and the crimes in Croatia and BH, calling for his acquittal. Jovica Stanisic’s defense decided to waive its right to seek his acquittal at the half-time of the trial 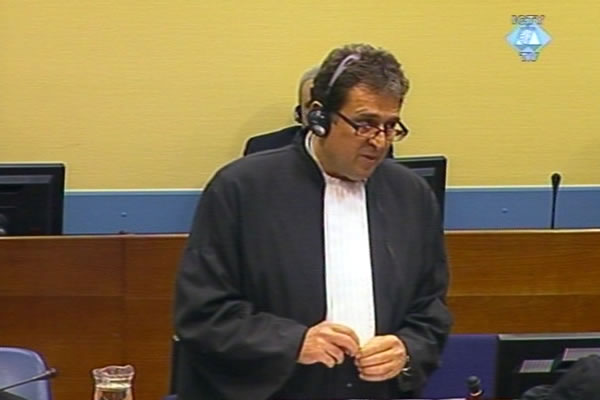 Franko Simatovic’s defense today exercised its right to call for his acquittal after the prosecution rested its case. The defense lawyers contend that under to Rule 98 bis of the Tribunal, there are grounds for his acquittal on all counts in the indictment for crimes in Croatia and BH. According to Simatovic’s defense, the prosecution has failed to call enough evidence to secure a conviction.

The defense lawyer Mihajlo Bakrac contends that the prosecutor didn’t offer ‘a single valid piece of evidence’ proving that Franko Simatovic was the commander of the Special Operations Unit or of any other unit of the Serbian State Security Service. The accused never held a high-ranking post in the police, the defense claims. In the period relevant for the indictment Simatovic was a ‘simple operations officer’ in the Serbian State Security Service and held the rank of ‘senior inspector’ without any special ability to influence the events in the field and the battlefield in particular, the defense counsel noted.

Bakrac argued that in the period relevant for the indictment, from 1991 to 1995, Simatovic acted solely on the orders of his superiors. One of them was the then chief of the State Security Service, Jovica Stanisic, who is in the dock with him. According to the defense, there is no evidence that those orders were illegal and that Simatovic exercised command over the units in the field as he saw fit.

The defense counsel denied the existence of any ties between the accused and the special units fighting in the battlefields in Croatia and BH and any connection between the volunteers’ units and the Serbian State Security Service. The prosecution witnesses claimed in their testimonies that the volunteers from the Scorpions unit operated in the village of Djeletovci under the command of the Krajina army. When they killed the Muslim civilians in Trnovo in the summer of 1995, the Scorpions were under the command of the VRS general Dragomir Milosevic, who was sentenced to 29 years for the crimes in Sarajevo. The witnesses didn’t establish the link between Zeljko Raznatovic Arkan and the Serbian State Security Service leadership, Bakrac said. In fact, the witnesses spoke about the links between Arkan and the JNA Novi Sad Corps and its commander Andrija Biorcevic, Biljana Plavsic and the local Territorial Defense units in Croatia and BH.

The defense therefore considers that the prosecution has failed to offer valid evidence on the involvement of the Serbian State Security Service in the crimes against non-Serbs in Croatia and BH and even more so of the former ‘senior inspector’ Franko Simatovic, who should therefore be acquitted at the half-time of the trial.

Jovica Stanisic’s defense indicated at the beginning of the hearing today that it will not present any Rule 98 bis arguments pursuant. According to Wayne Jordash, the defense ‘looked into the Tribunal’s case law’ and decided to refrain from presenting any arguments. The prosecutor will respond to Simatovic’s defense arguments on Monday.