INSIDER: STANISIC WAS THE BOSS

Jovica Stanisic and Franko Simatovic were directly in charge of a number of police and paramilitary units operating outside of the Serbia’s borders, claims an insider witness, former member of the Red Berets, the 72nd Special Unit of the Yugoslav Army and Arkan’s Tigers 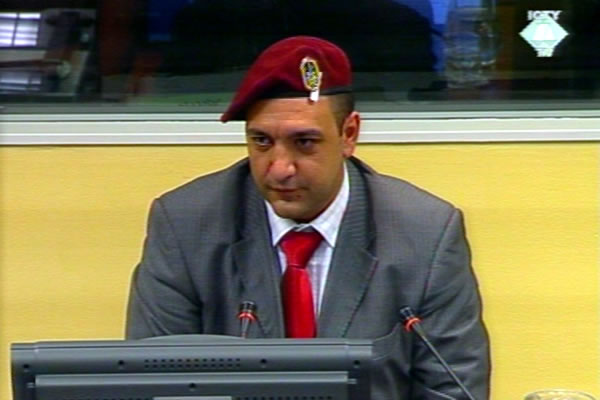 Dejan Sliskovic, witness at the Jovica Stanisic i Franko Simatovic trial
The trial of former chief of the State Security Department (DB) Jovica Stanisic, and his assistant Franko Simatovic, continued on Tuesday with the testimony of Dejan Sliskovic, former national judo champion, who was in the Anti-Terrorist Operations Unit (JATD) in 1994 and 1995. The unit was also known as the Red Berets. He also served in the 72nd Special Unit of the Yugoslav Army and finally, in the Serbian Volunteer Guard led by Zeljko Raznatovic Arkan.

Sliskovic is testifying without any protective measures. In late May 1994, he joined the Anti-Terrorist Operations Unit of the Serbian MUP as a volunteer, on the recommendation of his coach. The unit was later renamed the Special Operations Unit (JSO) and was known as the Red Berets during the war.

The witness, as he recounted, first underwent testing and security checks in the DB headquarters. There he met Dragan Krsmanovic, Stanisic’s close associate. He was then sent to the unit base in Lipovacka Suma near Belgrade, where he was issued a blue camouflage uniform and a red beret, tendered into evidence. The training was run by the unit veterans: Dragan Pupovac, Rajo Bozovic, Zvezdan Jovanovic and Vaso Mijovic. The witness heard stories that they had joined the Berets in 1991 and had been trained by Dragan Vasiljkovic, a/k/a Captain Dragan.

After training, in late September 1994, the Red Berets left Lipovacka Suma and headed to Petrova Gora in a huge convoy. They crossed into BH at the Raca border crossing, which was supposedly controlled by the Russian UNPROFOR troops. The convoy included the regular and reserve elements of the JATD; Arkan’s men and the JATD artillery joined it en route.

On arrival at Petrova Gora, the Red Berets and other units from Serbia joined Operation Spider, aimed at supporting Fikret Abdic’s forces in their fight with the BH Army 5th Corps. The Red Berets fought side by side with Arkan’s Tigers and the Scorpions, and the overall commander, according to the witness, was none other than Jovica Stanisic. Franko Simatovic commanded the Red Berets and Rajo Bozovic the JATD reservists.

Since he was in charge of securing the building where Stanisic and Simatovic were billeted and where their office was, Sliskovic was able to see who came to meet with them and sometimes overheard their conversations. He saw Ratko Mladic, Milan Martic and Fikret Abdic several times; they came to see Stanisic. From a conversation between Stanisic and Milorad Ulemek Legija, who commanded the Tigers in this operation, he was able to conclude that Legija was subordinate to Simatovic and obeyed his orders.

After the operation in Western Bosnia ended, in 1995, Sliskovic left the Berets and joined the 72nd Special Parachute Brigade; he was thrown out, as he claims, because he had served in the JATD previously. He then joined Arkan’s guard, and stayed in their base in Klis and Erdut until the end of 1995.

The personnel in the Berets and Tigers were paid in cash, in special envelopes. The Berets got twice as much as the Tigers. The prosecutor tendered JATD payrolls to support this claim; Sliskovic’s name is on them.

From what Sliskovic saw, from the relationship between Legija and Simatovic and the fact that the Tigers could move freely in Serbia with automatic weapons, he was able to conclude that Arkan’s guard was subordinated to the DB throughout that period. ‘This unit could not have acted that way without the MUP and DB control’, he said.

At the beginning of the cross-examination, slated to continue tomorrow, Jovica Stanisic’s defense lawyer asked Sliskovic to put on his head the red beret he had given to the OTP investigators six years ago, as he explained. After he complied, the prosecutor wanted the record to reflect that the beret fit well, but the defense counsel objected, claiming Sliskovic got the beret in the 72nd Special Brigade of the VJ, not in the JATD.