VIDEO EVIDENCE OF THE SPECIAL FORCES TRAINING IN BARANJA

In an effort to prove that the Serbian state security service (DB) units under the control of the accused Stanisic and Simatovic were training local Serb forces in Baranja, the prosecution today showed video footage of former Anti-Terrorist Unit commander Vaslije Mijovic and a female trainer by the name of Vanja talk about that 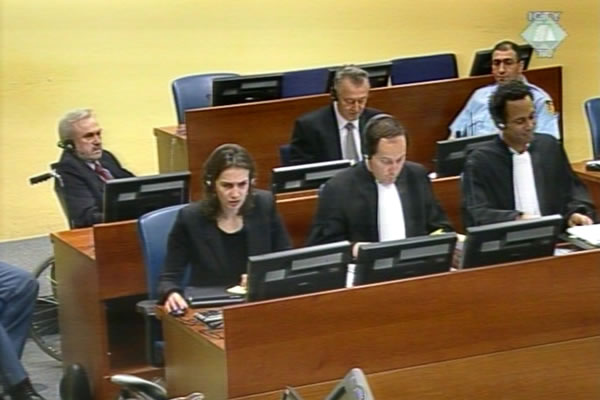 Jovica Stanišić i Franko Simatović u sudnici Tribunala
In the final part of the examination-in chief, prosecutor Klaus Hoffmann today played a number of video recordings showing members of the DB Anti-Terrorist Unit (JATD) in Baranja. A police insider testifying under the pseudonym JF-36 talked about them yesterday. The unit is one of the special units through which, the prosecution alleges, the accused chiefs of the Serbian state security service controlled the situation in Croatia and BH from 1991 to 1995 in areas where numerous crimes were perpetrated against non-Serb population.

The first clip shows JATD commander Vasilije Mijovic addressing young soldiers and their parents at the beginning of their training. Also recorded is Mijovic’s interview he had given after the ceremony to unknown journalist from Beli Manastir. Besides phrases such as ‘defense of Serb hearth and sacred land’ Mijovic told parents that they should ‘be proud of their children’ because the instructors would train them to ‘resist adequately’ in any occasion. Mijovic added that after the training they would become a part of the special brigade of the Republika Srpska Krajina police.

There is no indication on the recording of the date and place it was made. The witness noted that it obviously showed ‘a Baranja plain’, most likely the JATD training center in the village of Bilje. The witness added that he was not there when the recording was made, but was on site at other times, when Mijovic spoke to other trainees in a similar way. The name of the location was not disclosed so as not to endanger the witness. According to the prosecutor, the footage was confiscated by the Montenegrin police when they searched Vasilije Mijovic’s office.

The other prosecution video shows an interview with a female trainer from the Serbian state security service named Vanja. The witness said he had seen Vanja in company of Predrag Radetic Brada, who was a JATD member. The defense objected to the relevance of the video footage and the judges will rule on its admission later. The indictment alleges that Stanisic and Simatovic were in charge of ‘the funding, training and other forms of support’ to the units that committed crimes against non-Serbs in Croatia and BH from 1991 to 1995.

Most of the cross-examination by Stanisic’s defense lawyer Wayne Jordash proceeded in closed session. Simatovic’s defense contested the witness’s claims that the JATD members maltreated and robbed civilians in Baranja from 1991 to 1995. Defense lawyer Mihajlo Bakrac showed several documents he had recently received from Colonel Vasilije Mijovic, indicating that looted items were confiscated from the members of his unit and that alcohol consumption was prohibited during their stay in Baranja.

Finally, the defense lawyer referred to a text published in the Politika Ekspres newspaper, which claims that ‘JATD members brought peace to Baranja’ and that civilians were ‘relieved’ after their arrival. When asked if he had any reasons to doubt the claims made by the Belgrade newspaper, the witness said ‘it was not quite like it says in the text’. He repeated that he saw JATD members commit crimes, but he agreed that only individuals participated in the beatings and looting, not the entire unit. The witness also agreed that their victims were both Serbs and non-Serbs.

The police insider testifying under the pseudonym JF-36 completed the evidence. The trial of the former Serbian state security service leaders continues on Wednesday, 21 April 2010.