Jovan Glamocanin, member of the Crimean International Academy of Spiritual Sciences was first to give evidence for the prosecution, then for the defense, and has finally been subpoenaed to testify at the trial of Vojislav Seselj 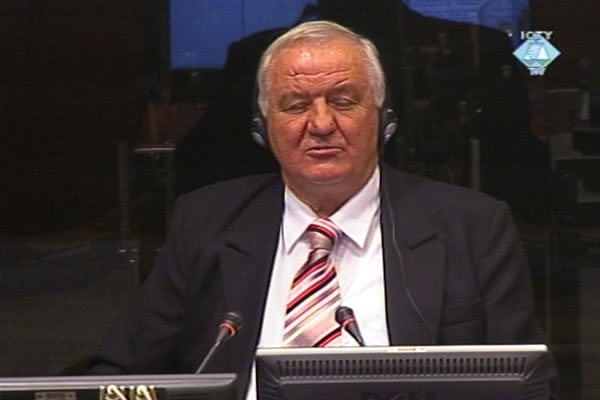 Jovan Glamocanin, witness in the Vojislav Seselj trial
Jovan Glamocanin, SRS deputy in the Pancevo local assembly, is yet another ’insider’ witness at the trial of the Serbian Radical Party leader who decided to switch sides after years of cooperation with the OTP. The Trial Chamber considered his volte face "spectacular" and issued a subpoena compelling Glamocanin to come to The Hague and give evidence as a court witness.

While he was still supposed to be a prosecution witness, Glamocanin was granted protective measures because he feared for his family’s safety. He claimed that ‘persons close to Seselj’ had tried to kidnap his wife after he had left the party in 1994. Today Glamocanin denied this. As he put it, even then he received assurances from the SRS that none of its members were involved in the kidnap attempt. Yet, he didn’t explain today why up until 2007 he kept claiming the opposite in his statements to the OTP. In early 2008, Glamocanin rejoined the Serbian Radical Party and was elected a deputy at the local elections in May 2008.

The witness did not renounce only the statements he gave the OTP; he also renounced a book he wrote where he contended that Seselj received $ 10 million from Milosevic. The witness admitted today that the book ‘lacked principle’ and was an ‘expression of his impotence’ in the face of the insults he received after his decision to leave the SRS in 1994. ‘That’s how it is with us in Serbia’, the witness noted with resignation.

Since Glamocanin was called to give evidence as a court witness, he was first examined by presiding judge Antonetti. The witness introduced himself as a member of the International Academy of Spiritual Sciences, headquartered in Crimea, describing briefly his political career from the Yugoslav Communist League to the Serbian Chetnik Movement and finally the Serbian Radical Party. In 1994, Glamocanin parted company with the SRS when he supported Milosevic’s blockade on the River Drina. In Glamocanin’s words, he joined the Serbian Chetnik Movement because of its program. Drafted by Seselj, this program included ‘preservation of Yugoslavia, parliamentary democracy and development of capitalism based on Draza Mihajlovic’s platform’.

Noting that Seselj’s speeches were an important part of the trial, the judge asked Glamocanin if the SRS leader’s public appearances were ‘improvised or prepared and conceived in advance’. Glamocanin stressed that Seselj was ‘by far the most intelligent person with greatest knowledge and the only person with a vision in the SRS leadership’ adding that Seselj’s speeches ‘were not improvised but inspired’. In his view, the Serbian Radical Party leader was always ‘in control of himself, of his thoughts and his language’.

The judge then wanted to know if the minutes of the SRS Main Board meetings were kept and where they were today, what role the party War Staff played and if the volunteers kept in touch with the SRS leadership in Belgrade after they were sent off to war in Croatia and BH. The witness claimed that the SRS only gathered the volunteers who were then placed under the JNA command. The witness also claimed that the SRS ‘didn’t have its units’, prompting the judge to use the Leva Supoderica unit as an example, noting that the Trial Chamber has already heard a lot of evidence on its independent operations in Vukovar 1991. Despite that, the witness maintained that there had been no ‘independent SRS units’.

Prosecutor Lisa Biersay revisited that question in her cross-examination of the witness. She showed Glamocanin a series of documents of the War Staff about the ‘coordination of the SRS units’ with the JNA and the Territorial Defense. The witness agreed that the prosecutor ‘read well’ what was in those documents, but claimed it was ‘badly’ and ‘clumsily’ worded by Zoran Rankic , ‘an almost illiterate’ deputy of Ljubisa Petkovic in the SRS War Staff.

The cross-examination of Jovan Glamocanin continues tomorrow when he will be examined by his political idol Vojislav Seselj.