BELGIUM: ANY CONCESSIONS TO BELGRADE WOULD HAVE "CATASTROPHIC CONSEQUENCES"

After his talks with the ICTY Chief Prosecutor Carla Del Ponte, Belgian Foreign Minister De Gucht says that many of his colleagues "have misanalysed the situation, believing that by making concessions on the issue of the surrender of Karadzic and Mladic they could get Serbia to take a softer stance towards Kosovo". In his view, it would be wrong and illogical to renew negotiations with Serbia. Belgrade's cooperation with the Tribunal "is now worse than it was before”, when the talks were suspended 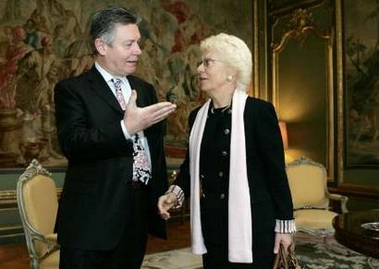 Carla del Ponte speaking to the Belgian head of diplomacy Karel de Gucht
“They think it’s not that important anymore, but they’re wrong, said Carla Del Ponte when the SENSE correspondent asked her to explain "the magic disappearance" of Karadzic and Mladic from the latest EU political documents. The conspicuous disappearance comes after years and years of EU’s persistent reminders to Belgrade of its obligation to surrender the two to the Tribunal.

Belgian foreign minister Karel De Gucht, who received the Chief Prosecutor today, shares her opinion. At the joint press conference held after their talks in Brussels, De Gucht observed that many foreign ministers in the EU countries "have misanalysed the situation, believing that by making concessions on the issue of the surrender of Karadzic and Mladic they could get Serbia to take a softer stance towards Kosovo". De Gucht thinks that making concessions on the issue of Karadzic and Mladic will not change Belgrade's hard-line stance on Kosovo. "Kosovo and the ICTY have nothing to do with each other", he noted.

The Belgian minister said that the Western diplomats were mistaken if they believed that making concessions to Serbia would have no consequences for the region. De Gucht believes these consequences might be "catastrophic". His recent visit to Croatia and Bosnia Herzegovina assured him of that. Touching upon the talks he had in Sarajevo and Zagreb, the Belgian foreign minister expressed his concern that this development might give "a totally wrong signal for the numerous cases tried before national courts”. “Belgium cannot support the continuation of the negotiations when the situation [with Belgrade's cooperation with the Tribunal] is worse now than it was when the negotiations were suspended”, he concluded. In his opinion, this would be "completely illogical".

Carla Del Ponte believes that the political support of the European governments to the Tribunal is weakening in the crucial moment as its mandate draws to an end. In the past few weeks, she has been touring the European capitals in order to convince the governments that Karadzic and Mladic, the chief culprits for the crimes in Bosnia Herzegovina and the genocide in Srebrenica, should not go unpunished. "I'm telling those who still wish to receive me – and fewer and fewer prime ministers and foreign ministers now find the time or interest to do so - that since last October, Belgrade has not been cooperating with the Tribunal at all. Not only has it failed to provide full cooperation – there has been no cooperation whatsoever.” Del Ponte says that in the past few months she has signed about a hundred requests for documents and requests for access to witnesses, but has yet to receive a single response.

Del Ponte left Brussels for Rome, where she will be received by Italian foreign minister D'Alema. She expects the "international community not to make compromises at the expense of justice", she said, and that she will continue to be asked to give her opinion on whether Belgrade is cooperating or not. "If the European governments still believe in the rule of law and justice, then they will have to give me that option," Del Ponte concluded at the end of her Brussels visit today.