KARADZIC’S MEDALS FOR ARKAN AND HIS MEN

Former member of Arkan’s men Borislav Pelevic claims that the paramilitary unit fought under the command of the Krajina army and police in 1992 and 1993. In 1994 and 1995, Arkan’s men fought as part of the Bosnian Serb security forces. This is why Radovan Karadzic awarded the Order of Karadjordje’s Star to Zeljko Raznatovic and the Milos Obilic Medal to the witness 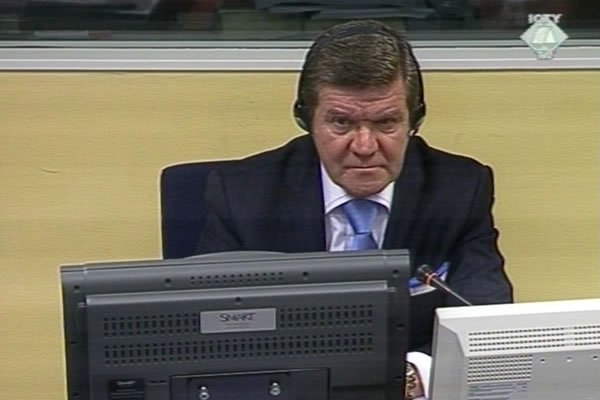 Arkan’s friend and fellow fighter Borislav Pelevic continues his evidence at the trial of two chiefs of the Serbian State Security Service Jovica Stanisic and Franko Simatovic. They are on trial for the crimes committed by the police and paramilitary units against non-Serbs in Croatia and BH. Pelevic again denied that the Serbian secret service had any influence over the Serbian Volunteer Guard, the unit he fought in. Testifying in Simatovic’s defense yesterday, Pelevic said that in 1992 and 1993 Arkan’s men fought as a unit of the Territorial Defense of the so-called SAO Slavonia, Baranja and Western Srem and the Krajina police. The Guard was then temporarily disbanded.

Its commander Zeljko Raznatovic Arkan mobilized his Guard again in November 1994, the witness recounted. The deputy defense minister in Krajina, Milan Milanovic a/k/a Mrgud, told Arkan that Slobodan Milosevic, Radovan Karadzic and Fikret Abdic had decided that trainers should be sent to the Cazin Krajina to train Abdic’s soldiers. Abdic’s troops fought against the BH Army. Pelevic claims that Arkan’s volunteers accepted the invitation and went to Velika Kladusa. While they were there, Abdic paid the soldiers their per diem allowances.

Next year, Karadzic called Arkan’s men for help twice. The first time was in the summer of 1995, when he wanted them to fight on Mount Treskavica. The second time was in September and October 1995, when they were needed in the Banja Luka region.On both occasions, Arkan’s men were under the command of the VRS, the witness contends. Simatovic’s defense counsel Mihajlo Bakrac showed several military documents that speak about the SDG and the Scorpions as units operating as part of the Republika Srpska joint military and police units. Pelevic confirmed it. He did ask the lawyer ‘not to compare’ Arkan’s volunteers with the Scorpions. As he explained, the Scorpions ‘disgraced the Serb army in the previous war’. Pelevic didn’t take part in the fighting in BH because he had been seriously injured in Croatia in 1993. He did visit his fellow fighters on the frontlines but he did not see the accused Franko Simatovic there.

The witness claimed that the families of some of Arkan’s men who had been killed in action received their pensions in Republika Srpska. After the war, Radovan Karadzic decorated a number of surviving fighters, including their commander Arkan. In 1996, Karadzic bestowed the Order of Karadjordje’s Star on him. Pelevic was awarded the Milos Obilic Medal.

Pelevic contends that during the wars in Croatia and BH, the Serbian Volunteer Guard had nothing to do with the Serbian MUP and the State Security Service. The witness admitted that Arkan was on excellent terms with Radovan Stojicic a/k/a Badza but ‘only in his personal life’. Stojicic was deputy interior minister in Serbia at the time. Pelevic’s examination-in chief was completed today. As the hearing drew to a close, Stanisic’s defense counsel Wayne Jordash asked the witness some questions about the relationship between the Serbian State Security Service and Arkan’s guard. Pelevic said that the Serbian secret service tried to ‘hinder the activities’ of the SDG, but did not have ‘the strength and the personnel to do it’. Yet this prompted Arkan’s men to avoid police check points at the border when they went to the front lines. People who were suspected of being secret service informers were thrown out from the SDG and Arkan’s political party, the Serbian Unity Party.