MILAN LUKIC IN THE HANDS OF THE SERBIAN STATE SECURITY 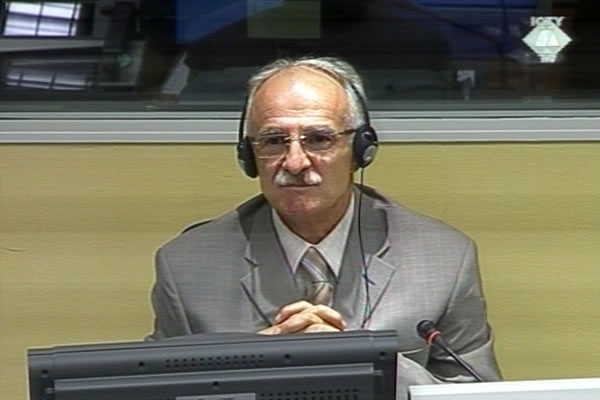 A former operative in the Uzice office of the Serbian State Security Service (DB), Radenko Novakovic, is testifying in the defense of the former DB chief Jovica Stanisic. In late 1992, Novakovic ‘had in his hands’ a notorious member of various Serbian paramilitary formations, Milan Lukic. When Lukic was arrested on the border between BH and Serbia, the witness interviewed him. The witness’s record of the interview was admitted into evidence today at the trial of Jovica Stanisic and Franko Simatovic.

The former chiefs of the Serbian secret service are charged with crimes against non-Serbs in Croatia and BH. Milan Lukic was tried by the Tribunal and in July 2009 was sentenced to life imprisonment for burning about 140 women and children at two locations in Visegrad and other crimes there. Milan Lukic’s case is not directly linked with the Stanisic and Simatovic case. The defense used it in an effort to corroborate its case that the Serbian DB was determined to deal with all the extremists, regardless of their ethnic background.

As the witness explained, the public security service operatives arrested Lukic for illegal possession of arms and false documents. The police had information that Lukic had participated in the murder of a Bosnian Serb, Stanko Pecikoza. They also had ‘preliminary information’ that Lukic was involved in the kidnapping of a group of Muslim civilians in the village of Sjeverin in October 1992. The content of Novakovic’s note was not discussed, except to note that during the interview Lukic claimed he had received training in the headquarters of the Red Berets unit in Ilok, run by the Serbian State Security Service. The witness said that the VRS had put the State Security under a lot pressure to release Lukic. In the examination-in chief, there was no explanation as to how he was released.

In November 1994, the witness was sent to Croatia, to the self-proclaimed Republic of Serbian Krajina as a part of Operation Spider. The witness was first taken to Petrova Gora. At a meeting with Jovica Stanisic and Franko Simatovic, the witness was told that he had to help the colleagues from Krajina to monitor the worsening security situation in the villages of Batnoga and Turanj, where refugee camps for Muslims fleeing Western Bosnia were set up. The witness contends that nobody mentioned that his task was part of Operation Spider; he learned the code name later. As the witness said, he was pulled back to Serbia in mid-December 1994 when the plans for his assassination were revealed.

In the course of its case, the prosecution insisted that Operation Spider proved that the Serbian State Security Service sent the police and paramilitary units from Serbia to Croatia and BH during the wars there. Some witnesses claimed that Stanisic commanded the operation from Petrova Gora with Simatovic’s help. The witness said today that after the first meeting at Petrova Gora he did not see Stanisic during his stay in Krajina, where he stayed for over a month. The goal of Operation Spider was to support Fikret Abdic’s forces which were fighting the BH Army’s 5th Corps. Joint forces of Bosnian and Krajina Serbs were involved in the operation.

The prosecution will have an opportunity to verify the allegations in the cross-examination that began at the end of the hearing today. Simatovic’s lawyer asked the witness a couple of question, completing his cross-examination.