Expert witness called by the defense of the first interior minister in the Republika Srpska government began his evidence on the establishment and functioning of the Bosnian Serb police until 1993. The expert’s testimony is based on a report he has drafted for the trial of the former Bosnian Serb police leaders 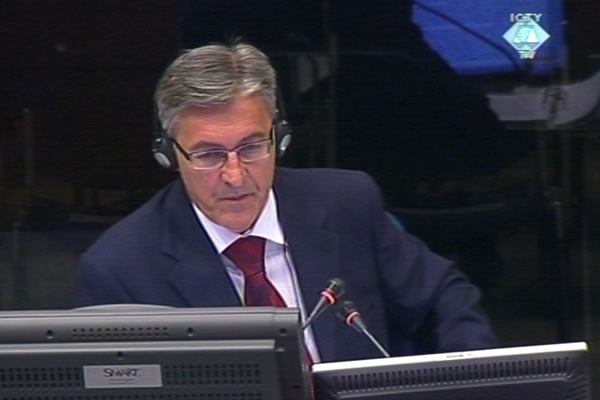 Mladen Bajagic, professor at the Police Academy in Belgrade, began his evidence at the trial of the former Bosnian Serb police officials. In 1992, Bajagic worked in the National Security Service of the Republika Srpska MUP.

Bajagic was asked by the defense of the first Bosnian Serb interior minister, Mico Stanisic, to draft a report, RS MUP – the beginnings, scope, jurisdiction, organization and management from 1990 to 1993. Bajagic testified before the Tribunal in 2008 about the functioning of the Bosnian Serb police as Ljubomir Borovcanin’s defense witness. The Trial Chamber sentenced Borovcanin, commander of the joint MUP RS forces that took part in the Srebrenica operation, to 17 years in prison.

On the first day of his examination-in-chief, the witness described the methodology and sources he used for his report. The sources include various legal instruments from the former Yugoslavia and Republika Srpska, documents of the interior ministries of BH and RS and the report drafted by the prosecution police expert Christian Nielsen. Bajagic focused on how the Republika Srpska interior ministry functioned de facto and de iure and on disciplinary and criminal responsibility in the police. In early 2011, Bajagic wrote an annex about the relationship between the police and the army in Republika Srpska, focusing in particular on subordination, cooperation and coordination.

In the first part of the analysis, the witness covered the historical background of the events immediately before the establishment of the Serb MUP, focusing on the influence of the three national parties in BH on the functioning of the state authorities. As Bajagic concluded, the Democratic Action Party tried to have ‘a dominant role in the personnel policy decisions in the MUP, thereby violating interparty agreements’. The Democratic Action Party armed its activists and sent them to undergo secret training in Croatia, the witness said. The witness also analyzed in detail the activities of the Croatian Democratic Union, noting that as early as in 1990, the Croats declared Herceg Bosna in parts of the BH territory. The witness devoted very little space to the doings of the Serbian Democratic Party, saying that the Serbs ‘took action in response to the developments’ and established Serb autonomous regions.

A judge noted there is a certain ‘misbalance’ in his report, given that he devoted more than 30 pages to the Croatian Democratic Union and the Democratic Action Party and only three pages to the Serb Democratic Party. Bajagic replied he ‘didn’t want to burden’ the judges with the information contained in Nielsen’s analysis, adding that all three sides ‘were active’.

The prosecution has asked for 15 hours for the cross-examination. The same amount of time was granted to Stanisic’s defense for their examination of Bajagic. The defense of Stojan Zupljanin, former chief of the Banja Luka Security Services Center, will also cross-examine the witness. Bajagic’s evidence could very well spill over into next week. Zupljanin and Stanisic are charged with crimes of the Serb police against Croats and Muslims in 20 BH municipalities.