Former member of the Scorpions unit Goran Stoparic confirmed at the trial of Jovica Stanisic and Franko Simatovic that the Serbian state security paid the salaries of the unit members. Stoparic also confirmed that in June 1995 the unit was stationed in Trnovo. The indictment alleges that the Scorpions executed six Muslims captured in Srebrenica in that area 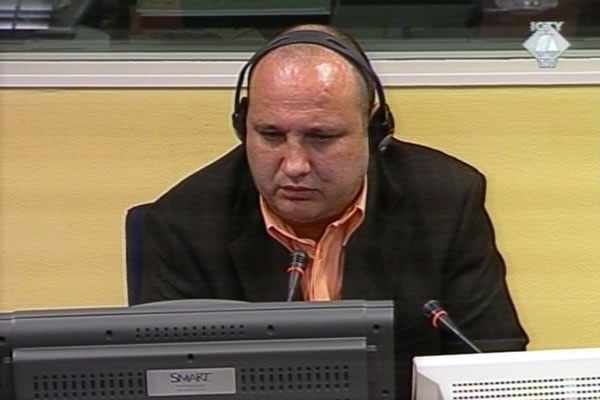 The trial of the two former chiefs of the Serbian state security service, Jovica Stanisic and Franko Simatovic, continues with the evidence of Goran Stoparic, former member of the Scorpions unit. The indictment alleges that the Scorpions were one of the units under the control of the accused. The murder of six Muslim youths and boys in Trnovo following their arrest in the Srebrenica area is listed among the crimes against non-Serbs in the wars in Croatia and BH in the indictment.

The examination-in chief was completed in about two hours. The key evidence the prosecution wanted to put in was that the Scorpions were transferred to Trnovo on the orders from Belgrade and that the Serbian state security paid the members of the unit. To prove this, the prosecution tendered into evidence the statements Stoparic gave to the OTP investigators in 2003, 2005 and 2010. The witness was then asked to clarify some of his earlier claims.

In his 2003 statement, Stoparic said that the Scorpions, under the command of Slobodan Medic Boca, secured the oil wells and facilities of the Krajina Oil Company in Djeletovci, in the self-proclaimed Republika Srpska Krajina, from 1992 to 1995. As Stoparic remarked, at the time he received ‘high wages’. Prosecutor Groome asked Stoparic where the money had come from. From 1994 to 1995, Stoparic received his pay from three sources: from the Oil Company, from the Serbian state security service and from commander Boca himself.

The witness confirmed that the Scorpions spent the second half of 1995 in Trnovo. At a meeting with Medic in June in Djeletovci, Stoparic learned that the official order for the transfer was issued by General Loncar, who commanded the RSK army in the Eastern Slavonia area at the time. Stoparic claims that some days before the official orders came in, the soldiers had learned on the grapevine that they would be transferred. Stoparic believes that Milan Milanovic Mrgud relayed the information. The indictment alleges that Stanisic and Simatovic issued the order from Belgrade.

Stoparic described Mrgud as a man who was respected by the Scorpions commander. When the commander spoke to Mrgud, he stood at attention, while he was arrogant in his dealings with General Loncar. Milanovic had a post in the RSK government and he followed the Scorpions to the battlefield, Stoparic said.

The prosecutor contends that yet another connection link between the Scorpions and the Serbian state security service was the fact that some of the Scorpions wore red berets, just like the Special Operations Unit members, established by the Serbian secret service. As Stoparic said, that only deserving Scorpions – and he was among them – were allowed to wear red berets. ‘Ordinary’ members wore black berets.

To hide the link with Serbia, at least 60 percent of the unit members had to be Serbs from Krajina and Bosnia; no more than 40 percent could be specials from Serbia proper. As Stoparic, he learned this from Boca when the latter rejected the proposal to take in ten special unit members from Nis. Medic explained that most of the soldiers had to be from outside of Serbia proper. That way, the unit could be described as coming from the RSK or Republika Srpska, albeit with a smattering of volunteers from Serbia.