A protected prosecution witness testifying at the trial of the former chiefs of the Serbian state security service said today that it was ‘public knowledge that Franko Simatovic issued orders to the special units trained in the Golubic camp near Knin’. As the witness said, Martic and Babic asked Jovica Stanisic to remove Frenki from Knin because he was too ‘arrogant’ 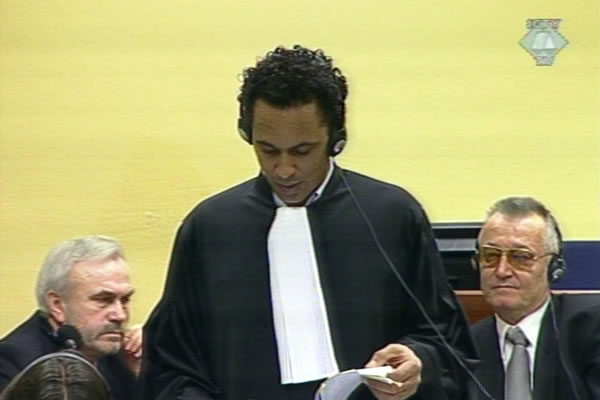 Wayne Jordash, defence counsel of Jovica Stanisic
At the trial of the former chiefs of the Serbian state security service, a protected prosecution witness described in his cross-examination the training of the special units in the camp established in May 1991 in Golubic near Knin under the auspices of the Serbian state security service. Replying to Stanisic’s defense counsel Jordash, the witness said that ‘Frenki and Captain Dragan’ – Franko Simatovic and Dragan Vasiljkovic – were in charge of the headquarters in Golubic.

As the witness said, in May 1991, the first group of about 100 to 150 volunteers completed their training. A lot of them were members of Martic’s police. After the training, they went back to their police stations or took part in the special units’ operations, such as the attacks on the police stations in Glina and Dvor na Uni. The witness didn’t hear Frenki issuing any orders to them but, as he put it, it was ‘public knowledge’ that Frenki exercised command over them. Members of the special unit were nicknamed Kninjas and were also called the ‘invincible’ and the ‘invisible’.

Soon afterwards, the Territorial Defense members joined the special units in training. Yesterday, the witness said that the problems started when Milan Martic, who headed the police at the time, refused to hand over the command of the Territorial Defense to Simatovic. However, this was not the only problem with Simatovic. As the witness said, Simatovic acted ‘like a big boss’ in Krajina; he was ‘arrogant’. Simatovic mingled with ‘murky’ people, drove expensive jeeps and ate in restaurants at the time while ordinary people struggled to survive.

This is why Milan Martic asked Jovica Stanisic to remove Frenki from Knin, the witness recounted. In late May 1991, Frenki’s headquarters were moved from Golubic to the Knin Fortress. Later that year, the training camp was moved to Korenica. In the meantime, Simatovic spent some time in Belgrade.

In the re-examination, prosecutor Groome dealt with Jordash’s assertion that the witness didn’t speak the truth; Jordash had apparently put it to the witness in closed session. The prosecutor asked the witness if he would stand to gain anything if he lied to harm the accused. The witness said that he had ‘absolutely no interest or gain’ in it. The only thing he wanted was to ‘put an end to his past life after 20 years’ and to go on living with ‘his new family because his old family has moved to the hereafter’, the witness responded.