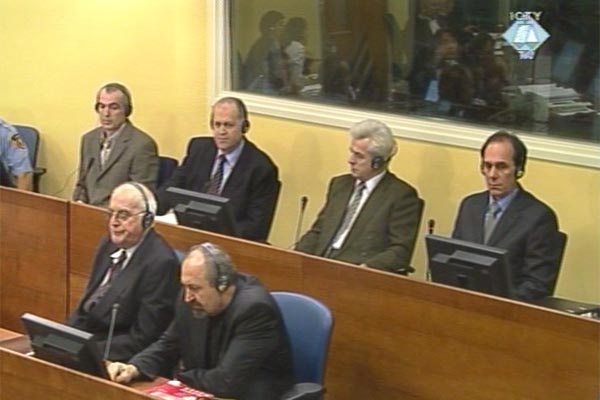 Vujadin Popovic, Ljubisa Beara, Drago Nikolic, Ljubomir Borovcanin, Vinko Pandurevic and Milorad Trbic in the courtroom
At the trial of seven Bosnian Serb military and police officers charged with crimes in Srebrenica and Zepa in the summer of 1995, the prosecution called the last two of the twenty or so members of the BH Army surveillance service. Their evidence should persuade the judges of the authenticity of the transcripts of the intercepted conversations in July and August 1995. The prosecution wants to have them admitted into evidence.

The defense counsel contests the authenticity of this material. They point chiefly to "the great number of corrections" and to the fact that only three actual audio recordings of the intercepted conversations exist. Some of the accused are among the VRS officers whose conversations were intercepted.

Witness 125, testifying under protective measures, confirmed that he personally "intercepted, recorded and transcribed" 17 of the 18 intercepted conversations that were shown to him by the prosecution. He explained that he could easily recognize the voices of the speakers and that they often introduced themselves. This is how he was able to determine that Colonel Beara was a participant in several conversations that were of particular interest for the prosecutor.

The witness gave evidence in 2001 at the trial of General Radislav Krstic; his evidence today differed in some respects. Ljubisa Beara's defense counsel wanted to challenge his evidence today because of these changes. Christopher Meek focused on what the witness said in 2001: that one of the speakers in the recorded intercepted conversations "was probably Colonel Beara". Today the witness said the word "probably" was an error and should to be erased.

Meek then put it to the witness that he "was told what might be an error". The witness met with the prosecution two days ago, and Meek asked him who actually identified this error. The witness replied he read his own statement and spotted the error that had to be corrected.

The witness testifying under pseudonym 145 confirmed the authenticity of 25 transcripts of the intercepted conversations. He personally "typed and encrypted them". He will continue his evidence on Monday 19 February, when the trial of Ljubisa Beara, Vujadin Popovic, Drago Nikolic, Ljubomir Borovcanin, Vinko Pandurevic, Milan Gvero and Radivoj Miletic continues.