Retired VJ general Djordje Curcin is testifying about Ratko Mladic’s stay in the VJ military resorts in Rajac and Stragari. Curcin has also described Mladic’s meetings with the chief of the VJ General Staff Momcilo Perisic 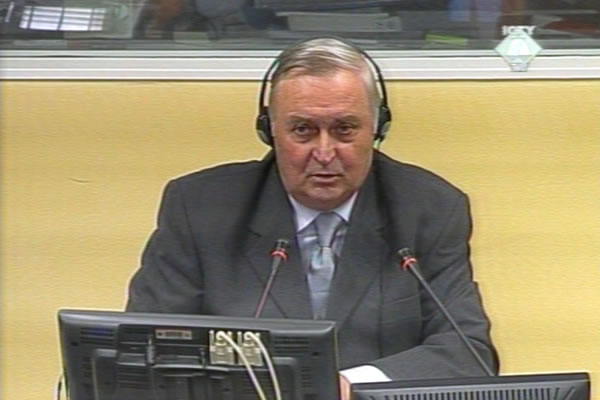 Đorđe Ćurčin, svjedok na suđenju Momčilu Perišiću
Through the evidence of retired VJ general Djordje Curcin, the prosecution wants to prove that Momcilo Perisic, former chief of the VJ General Staff, provided logistic support to the commander of the VRS Main Staff Ratko Mladic even after the war ended. At the request of the prosecution, the Trial Chamber issued a subpoena to compel the former operative in the VJ’s First Army to come to The Hague and testify.

Most of Curcin’s evidence focused on his ties with Mladic; they met for the first time ’32 years ago at the Command Staff Academy’. As time went by, they became ‘buddies and family friends’, the witness said. They continued to see each other until Slobodan Milosevic was arrested and until the law on cooperation with the Tribunal was passed in 2002, the witness said. Mladic told him them that they would not meet again for security reasons. According to lead counsel for the prosecution Mark Harmon, the prosecution ‘believes that Curcin took part in sheltering Mladic’; he was called to give a statement before a Belgrade court in the case against Mladic’s henchmen.

Curcin met with Mladic in the VJ facilities in Rajac and Stragari. The first time, in July 1997, Mladic stayed about a month in the VJ resort in Rajac. He had a cook, a waiter and a driver and ‘several guys in the VJ uniforms’ as his security detail. Apart from Curcin, general Perisic also met with Mladic on Rajac in the second half of July 1997. Perisic and Mladic, the witness recounted, ‘played chess, or maybe some table tennis’, had lunch and then the chief of General Staff returned to Belgrade. In early autumn of 1997 Perisic met with Mladic in the military resort Stragari. As the witness put it, then they also ‘took walks, played chess, cards and table tennis, had lunch and went for another walk’.

At that time he was not aware of the Tribunal’s indictment, Curcin contends. However, the witness ‘gave fatherly advice’ to everybody in touch with Mladic not to spread stories of Mladic’s whereabouts. ‘A lot of people loved Mladic, but there were those, renegades from foreign security services, who were roaming the country looking for Mladic in order to hand him over for money’, Curcin said.

When he was cross-examined by Perisic’s defense counsel, Curcin said that he met with Mladic ‘always privately, never officially’. According to the witness, the VJ and the VRS were ‘two separate armies’; the former commander of the VRS Main Staff got his benefits from the VJ: he underwent medical treatment in Belgrade, got his salary through ‘the defense ministry accounts’. Mladic’s security was most likely paid by the defense ministry, the witness added.

Those answers led Judge Picard to try and confirm if it was ‘usual for one army to pay the personnel of another army’. Mladic got his salary through the defense ministry financial department, Curcin replied, noting that he didn’t know who transferred the money to them. The judge then asked the witness if it was ‘usual for soldiers in VJ uniforms, who were not VJ personnel, to stay in the VJ resorts and for it not to surprise anybody’. In Curcin’s words, ‘they would be more surprised if they saw other uniforms’; in this way they ‘kept a low profile’. This was important, the witness contended, because otherwise, ‘the dogs of war would come to kill, arrest and take Mladic away’.

When Judge David asked him if he would have revealed Mladic’s whereabouts had he been ordered to, Curcin said, ‘no, never, at any cost’. ‘I was a pensioner, and Mladic was my friend’, he said.